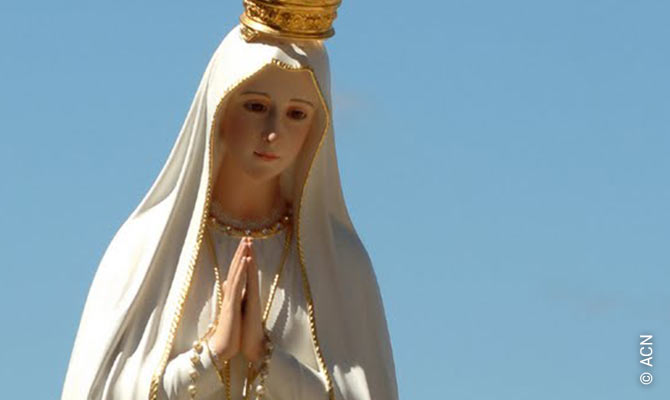 The diocese of Pyongyang in the capital city of North Korea will be consecrated to Our Lady of Fatima. This was announced by Cardinal Andrew Yeom Soo-jung, Archbishop of Seoul, on 25 June during a ceremony commemorating the beginning of the war 70 years ago to the day – at a time when tensions on the peninsula are once again on the increase, reported Aid to the Church in Need (ACN).

On this occasion, Msgr. Andrew Yeom Soo-jung spoke about the significance of peace and harmony for the Korean peninsula, commemorating the approximately three million people who died during the war that broke out on 25 June 1950, the tragedy suffered by the refugees, the drama experienced by families that were torn apart and the persecution of Christians by the North Korean regime.

The announcement of the consecration of the diocese of Pyongyang was the highlight of the holy mass held at Myeongdong Cathedral in Seoul. Prayers for the reconciliation of the Korean people are being said there this year.

The anniversary of the beginning of the war has fallen at a particularly tense time, a time when leaders in the North Korean regime have severed all communication channels with the South, blowing up a building in Kaesong on 16 June that served as the joint liaison office for delegations of both countries.

Technically speaking, the two countries are still at war, and the regime in Pyongyang continuously threatens the development of new weapons of mass destruction. The escalation of tensions over the past few weeks has brought the possibility of a direct military confrontation ever closer and signifies a large step backward on the path of reconciliation, a path that the two countries had been pursuing for several years and which culminated in the Panmunjom Declaration signed by South Korean President Moon Jae-in and North Korean leader Kim Jong-un in April 2018.

The Catholic Church has been actively supporting the peace process on the Korean peninsula. For example, a Holy Mass for peace is celebrated each day in South Korea; the first took place in December of last year and the last will be held on 28 November. The starting signal for this initiative was given during the plenary session of the South Korean Bishops’ Conference last November.

The Korean conflict is one of the bloodiest episodes of what is known as the Cold War, a war that divided the world into two ideological factions. The main supporter of the regime in Pyongyang was China, while the United States backed the regime in Seoul. An armistice ended active combat operations in 1953, but technically, the two countries are still at war.

In addition to the ever-present danger of a military conflict on the Korean peninsula, the two countries are also divided by the issue of religious freedom. According to the most recent report on the persecution of Christians, published by the pontifical foundation and charity ACN in October 2019, “North Korea is widely considered the most dangerous place in the world to be a Christian.” The profession of Christianity, which is seen as “Western”, is “severely punished” in the country.

According to the charity, witness statements by defectors from North Korea describe how Christians who are arrested by the regime “face torture” and many of them are “sent to camps” primarily set up for political prisoners, where they are required to perform forced labor.

According to the report published by ACN, “between 50,000 and 70,000 Christians could be present in these camps”, comprising about half of the prisoners held there. Christians suffer “extra-judicial killings, forced labor, torture, persecution, starvation, rape, forced abortion, and sexual violence” when they become ensnared in the close-meshed surveillance network of the North Korean regime.

The post North Korea: Cardinal Yeom Announces Consecration of Pyongyang to Our Lady of Fatima appeared first on ZENIT – English.