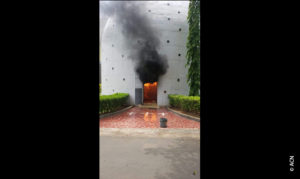 The international Catholic pastoral charity and pontifical foundation Aid to the Church in Need (ACN International) has condemned in the strongest terms the terrorist-style arson attack against the Catholic cathedral in Managua, the Nicaraguan capital. “We wish to express our closeness to the Catholics of the country at this difficult time and assure them of the support of our prayers”, said the executive president of the charity, Thomas Heine-Geldern, on Saturday. “This is the most recent incident in a string of anti-Christian attacks, not only against buildings but against the Catholic faith as well. We hope that the person or persons responsible for this attack will quickly be brought to justice.”

According to a statement by the archdiocese of Managua, on Friday, July 31, a man entered the Chapel of the Precious Blood, in the Managua cathedral, and threw a firebomb, partially destroying a precious 17th-century wooden image of the Blood of Christ before which Pope John Paul II had prayed during his visit to the country in 1996. The statement issued on Friday by the archdiocese expressly identified the attack as an act of terrorism, contradicting an earlier remark by the wife of President Ortega, who is also Vice-president, claiming that it had been an accident caused by burning candles. This was categorically denied by the archdiocese, which stated that precisely for fire safety reasons and on account of the great historical and religious significance of the crucifix no candles are permitted close to the image. Instead, witnesses had testified to the fact that this was a carefully planned and executed attack and that the attacker clearly knew exactly what he was doing with the firebomb.

“These attacks against the faith of the Catholic people need to be carefully analyzed, in order to expose the ideological and physical perpetrators of this macabre and sacrilegious act”, the statement by the archdiocese continued.

The arson attack is merely the latest in a string of attacks against Catholic churches in Nicaragua. In the last two weeks alone there have been three such attacks on Catholic churches, with deliberate destruction and theft of sacred objects. The archdiocese described it as nothing less than an expression of hatred towards the Catholic Church and her mission of evangelization.