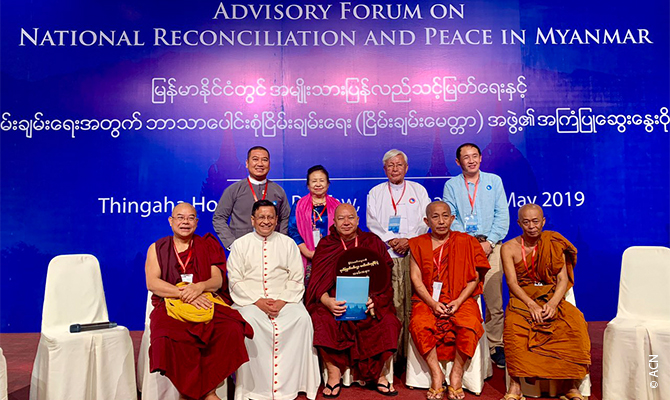 Religions for Peace issued an appeal signed by Religious Leaders of Myanmar in connection with the elections scheduled for November. The document is entitled “Seize the opportunity!” and was published on July 13, 2020. Aid to the Church in Need (ACN) interviewed Bishop John Saw Yaw Han, General Secretary of the Catholic Bishops’ Conference of Myanmar, to understand the importance of this document and to bring into light more about interreligious dialogue in the country. Most importantly, this document also seeks to highlight what the future holds based on the important role of the Religious Leaders of different religions. It aims to shed light on how the Religious Leaders of Myanmar are responsible to the better establishment of peaceful coexistence while respecting human rights. Interview by Maria Lozano

All the Burmese Catholic Bishops, as well as the religious leaders of Buddhist, Muslim, and Hindu have signed the text. Why is this document so important?

Religion is a sensitive issue in Myanmar. In Myanmar, politically motivated religious violence has a very ancient root and has got far-reaching consequences. Religious intolerance is often manifested in hostile acts in the country by denouncing or ridiculing religious values of a particular religion. The country has already experienced extreme violence about religious issues resulting in many deaths and homelessness. The rising cases of religious fanaticism and negative indoctrination are disturbing in the country. Sometimes religion is being used for social dominance, protection of economic and political interests by a small group of individuals. For them, conflict and violence are necessary in order to de-stabilize the country, to deter outside investors. With little competition, only these individuals control the economy, which leads to a lack of development and poverty. Indeed, it is “Religious Belief” which is the easiest way to create tensions.

In your opinion, what is the most important point in the document?

The Religious Leaders have pointed out rightly that “Religious Leaders are too timid in protesting injustice”. This is the most striking and important point. For many decades, some religious leaders sided with the powerful and ignored the oppressed. The religious leaders need a prophetic voice and moral courage in fighting against injustice, in building up peace. This coming election is very important because it is still choosing between the old system (which is an exclusive culture, before 2015) and Federalism (inclusive culture). Now Myanmar’s transition to democracy is ongoingly ushering a series of violent conflicts and homelessness, and Myanmar is on the cusp of major reforms. We are still in the process of uprooting the old system. In this up-rooting process, our religious leaders must play a crucial role, in building up a nation, to educate the people and their conscience, especially in the coming election.

In fact, during these years of the cusp of major reforms, many changes and many positive signs have been seen and noted. With sensible leadership and articulation of democratically smart vision allowing diversity of religion, culture, ethnic identity along with re-education and re-orientation at every level, Myanmar could become a beacon of religious and ethnic inclusion.

What is the contribution of the Catholic Church to interreligious dialogue in Myanmar?

Each individual can make a difference! All Catholics, as citizens of Myanmar, are also responsible for the country of Myanmar. We are convinced that working for the development of the country is really our challenge and our duty as citizens. It would be wrong for us, as Catholics and as citizens of Myanmar, to fail to be engaged in the struggle of the greatest nation-building of our time. In critical times, it becomes the duty of all citizens to raise voice for the common good of the country. Finally, if all human beings have rights, the same holds true of duties. Therefore, though Catholics are a minority in Myanmar, under the leadership and guidance of His Eminence Charles Cardinal Bo, the Catholic Bishops’ Conference of Myanmar (CBCM) plays an important role in nation-building. Since the 2015 election, CBCM has drawn-up a five-year strategic plan for nation-building with the special emphasis on education and integral human development, indigenous rights and environmental justice, rights of women, and collaboration with other denominations and religions for peace and human development.

The Episcopal Commission for Inter-religious Dialogue and Ecumenism is one of CBCM’s commissions aiming to collaborate with the peoples of all faith from different religions and denominations in the establishment of peace and mutual co-existence. The commission plays an important role at grass-root levels, and Religion for Peace (RfP) plays a role at the international level. His Eminence Charles Cardinal Bo and Bishop John Hsane Hgyi of Pathein Diocese, are responsible for the commission of the inter-religious dialogue, and they play leading roles in the RFP, which is recognized nationally and internationally.

What other challenges related to interreligious dialogue do your country have to face, and which must be addressed?

The most popular social media in Myanmar is Facebook. There are even government official pages that release official statements since it is very easy and faster means to reach to the people. On the other hand, there are still many fake accounts on Facebook with fake profiles with the intention of spreading fake news, hate speech and incitements, creating religious conflicts and violence. Just for this purpose which doesn’t meet the good of the people, some are doing it privately, and still, some are doing it as a team. There may be political reasons and economic interests behind this.

The Facebook team and Ministry of Information are taking charge of removing and eliminating all the fake accounts/posts, which spread hate speech causing fake news and religious conflict, but still need to do it more effectively.

Another historical fact was the visit of Pope Francis to Myanmar in 2017. What has this visit brought to the country?