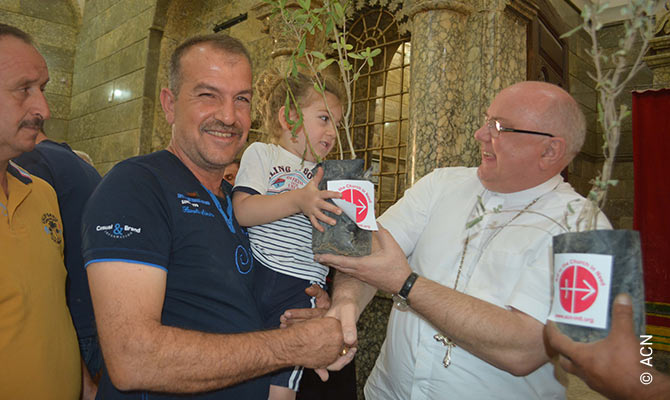 The Catholic charity and international pontifical foundation Aid to the Church in Need (ACN) has published the report, “Life after ISIS: New challenges to Christianity in Iraq” which includes the results of a series of surveys carried out over a one year period. The study addresses the current challenges facing Iraqi Christians, who returned to their hometowns in the Nineveh Plains, after being the victims of dramatic persecution in 2014, internationally recognized as genocide.

The report warns that if the international community does not take immediate action, forced emigration could reduce the Christian population in the region within four years to 80% less than it was before the invasion of ISIS. This would move the Christian community from the category of “vulnerable” to the critical category of “endangered with extinction”.

According to the report, 100% of the Christians living in the area sense a lack of security and 87% of them even indicate that they feel it “very much” or “remarkably”. The surveys point to the violent activity of local militias and the possibility of a return of the Islamic State as the main reasons for this fear. 69% indicate this as the primary cause of a possible forced migration.

Above all, the Shabak Militia and the Babylon Brigade, the two main Iranian-backed militias operating in the Nineveh Plains, have been the subject of complaints. They operate with the permission of the Iraqi government because they helped defeat ISIS, but 24% of respondents say that “their family has been negatively affected by a militia or other hostile group”. “Harassment and intimidation, often related to demands for money,” are the most common forms of hostility they report.

In addition to insecurity, Christians indicate unemployment (70%), financial and administrative corruption (51%) and religious discrimination (39%) at the social level as current challenges that continue to push Christians to migration. Disputes between the central government in Baghdad and the Kurdistan Regional Government over certain Christian-majority areas increase the feeling of insecurity.

The study, led by ACN’s head of the Middle East department, Father Andrzej Halemba, and prepared by Xavier Bisits, combines secondary data with primary sources material and is based on sample surveys conducted by Bisits, ACN’s collaborator in Iraq in 2019.

“The report is not pessimistic, but it is a clear warning because without concerted and immediate political action the presence of Christians in the region of the Nineveh Plains and its surroundings will be eliminated,” denounces Father Andrzej Halemba.

However, despite the urgent alert call to the international community, ACN’s project manager notes “a positive evolution” if one takes into account that, in the first survey carried out by ACN in November 2016, only 3.3% of Christians from the Nineveh Plains held any hope of returning to their cities and towns, due to security concerns and lack of housing. “Today, 36.2% of Christians have returned,” states Father Halemba. This positive balance, according to Halemba, is due to the ACN’s long term rehabilitation plan launched with other organizations to tackle the rebuilding of the devastated Christian homes in the Nineveh Plains in early 2017. “The plan aimed to restore homes and provide employment opportunities. All local Churches showed solidarity and joined together in the Nineveh Reconstruction Committee (NRC), an organism set up to coordinate the reconstruction process”, explains Father Halemba.

ACN provided € 6.5 million to the plan reconstructing 35% of the houses (a total of 2,860 houses in six cities and villages). These efforts had the desired effect and a significant number of families have returned home. “As of April 2020, 45% of the families have returned, although many of them segregated, only part of the members that constituted them have returned. A total of 8,166 damaged and destroyed houses have been repaired,” summarizes the ACN representative.

Despite the figures, ACN’s latest surveys worry the foundation because they reveal that although homelessness is no longer an obstacle, the prevailing fear and insecurity in the area make it difficult to provide necessary conditions for the survival of Iraqi Christians. “The outlook is inevitably bleak because Christians feel that they have reached a turning point in terms of the viability of their presence in the region,” states Father Halemba. “There are containment strategies, plans, and initiatives that are not only feasible but sustainable if given regional, national and international cooperation. As many and varied as these strategies may be, what they all have in common is urgency,” stresses the foundation’s representative.

In addition to measures aiding economic development, the head of ACN’s projects in the Middle East calls for “the presence of a permanent representation of Christians in national and local government to ensure the defense of their fundamental human rights, especially the right to equal citizenship,” which is not the case today.

“On our side, we will do everything in our power. Never should future generations say of us: you did too little, too late”, concludes the ACN project manager. 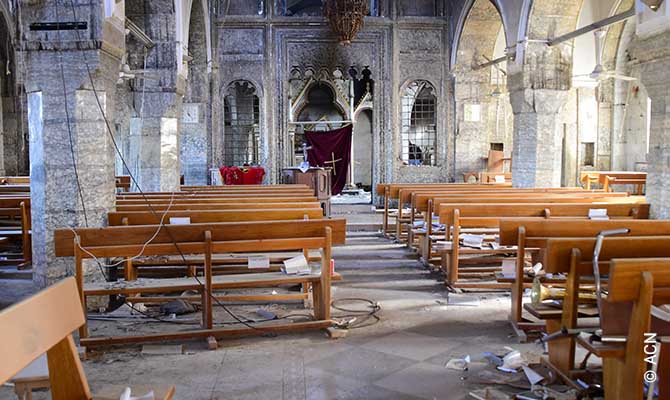 From 2014 to the end of 2019, ACN’s benefactors provided € 46.5 million to maintain the Christian presence in Iraq and in particular in the Nineveh Plains.

In the summer of 2014, Christians found themselves in a hopeless situation after fleeing ISIS’s advance towards Mosul and the Nineveh Plains. ACN reacted immediately and through emergency relief efforts the charity was able to help ensure the immediate survival of 11,800 internally displaced families. To sustain the Christian population, ACN undertook one of its largest emergency aid commitments in its long-term history: between 2014 and 2017, the foundation provided € 34.5 million in aid projects in Iraq, supporting Christian families with basic sanitary and food needs, temporary housing (caravans and rental subsidies), eight caravan schools and medical care.

Parallel to this direct aid, ACN’s Department of Public Affairs advocated at the level of the United Nations, EU institutions, EU member states, and the US government, seeking to draw attention to the selective extermination by Daesh (ISIS) of Christians and other minorities in Iraq. In February 2016, based on a document prepared by this department, a successful European Parliament resolution recognized the genocide of Christians and other minorities in Iraq. Following this, the same document was expanded and submitted to the US State Department where there, too, recognition of genocide was passed.

ACN is currently carrying out a new phase in its reconstruction plan for Iraqi Christians. The central objective is to rebuild the infrastructure of the Church-run facilities in the Christian cities and towns of the Nineveh Plains. Of the 363 Church facilities designated for reconstruction or repair (34 totally destroyed, 132 burned, 197 partially damaged), 87% will have additional social or welfare support function, including parish halls that serve as community centers for pastoral and social activities, educational facilities, orphanages, residential care homes, clinics, as well as residences for those who provide services to these centers (religious serving as teachers, health personnel, or psychosocial support professionals).