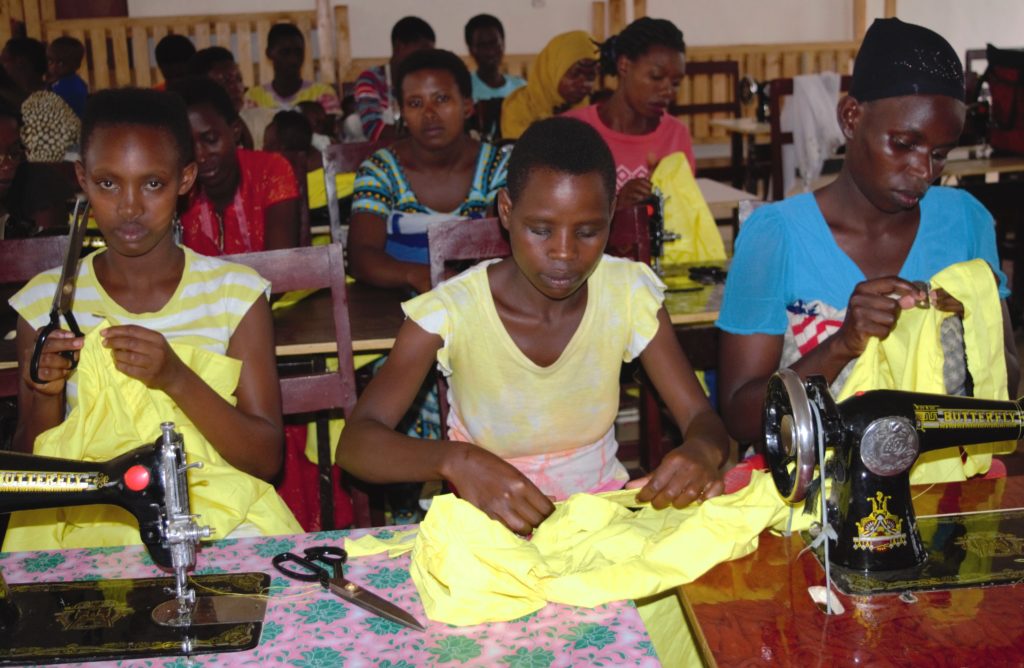 Nduwimana found herself facing the birth of her first child far from home, after a long journey, living in a humble shelter.

Thanks to your help and support, this Christmas she finds herself welcomed into a community and feels a sense of belonging. “I had forgotten what it was like to smile.”

At just 19 years old, Nduwimana was alone in Rwanda’s biggest refugee camp, Mahama, where 61,000 people live in closely-packed rows of tents and semi-permanent shelters stretching to the distant hills. The man who caused her pregnancy threw her out when he discovered she was expecting.

“There’s nothing more frightening than being on your own in the last month of pregnancy,” she says. “I was alone, young, with no experience.”

She had no family to support her. Political turmoil in her home country of Burundi has torn many families apart. “I didn’t think I would ever be happy again,” she recalls. “My face was always sad.”

Then, after her baby was born, Caritas Rwanda and the Sisters of Charity asked Nduwimana if she would like to enroll on their training program for young mothers to learn dressmaking skills. She said yes.

Sewing machines, fabric, and other haberdashery were supplied by Caritas, and now six months later she and 85 other young women have completed the course. They gathered to receive their certificates, proudly wearing clothes they made themselves.

“I had forgotten what it was like to smile,” she says, “but look at me now, I’m always laughing. It’s all thanks to Caritas.”

The girls are building up some much-needed confidence through their new skills, their friendships with each other and the care shown them by Caritas staff and the Sisters of Charity.

When asked how many points out of ten she would give the assistance from Caritas, Nduwimana replied: “Ten out of ten – of course!”

A place of refuge

Mahama camp lies in the east of Rwanda, one of Africa’s tiniest nations. It hosts mainly Burundians like Nduwimana who have been forced to abandon their homes and farms over the past four years.

The exodus was sparked by deadly violence in April 2015 after Burundian President Pierre Nkurunziza decided to run for a disputed third term. Extreme food insecurity and economic decline compounded the situation.

The numbers finding refuge in Mahama continue to grow each month. Half of the camp’s population are children.

“We are dealing with a long-term crisis,” explains Thérèse Nduwamungu of Caritas Rwanda. “People who arrive in Mahama have nowhere else to go, so we want to help them establish livelihoods as well as meeting immediate basic needs.”

Women’s groups like the seamstresses are learning to manage credit and savings; others are starting kitchen gardens to grow vegetables, with tools and training provided by Caritas. 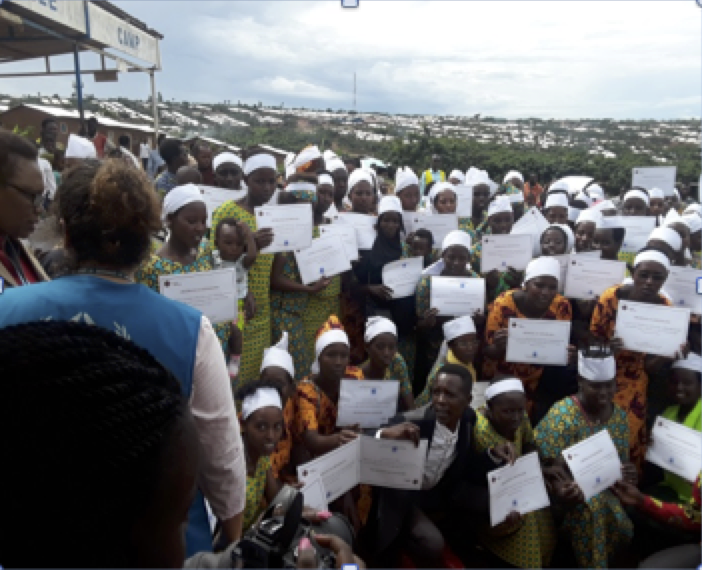 The new dressmakers receive their certificates.

“We focus our work on some of the most vulnerable groups,” says Thérèse, “single female heads of household, people who are older or disabled, and those traumatized by the awful experiences they have suffered.”

Frail patients in hospital are getting fresh provisions to supplement their nutrition. Caritas staff and a group of 33 trained volunteer counselors pay visits to people who are suffering psychological and emotional scars, carefully listening to their stories and directing them to support services. The refugees say that simply being heard and understood brings them comfort and relief.

“We are the only humanitarian agency supporting people with specific needs in Mahama camp,” points out Thérèse. “The situation here is critical.” Caritas Rwanda is currently reaching 5,700 people directly, with positive benefits for over 17,000 more indirectly.

Kanani is a fragile 72-year-old man, also living alone in the camp. “I was separated from my family at the time we fled out of Burundi in 2015,” he explains.

“Try to imagine what it is like to find yourself in an unknown country, tired, hungry, sick and without your children to help you. It has been the most terrible experience.”

When he arrived in Rwanda, Kanani says, he didn’t expect to encounter compassion. He hoped at best for safe shelter in the camp.

So he was taken by surprise when Caritas Rwanda visited him, listened to his troubles and brought food to help him through his illness. He now receives a monthly supply of rice or maize flour, one of over 3000 people at special risk receiving nutritional help.

His voice full of emotion, Kanani explains what these visits mean to him. “I can’t find enough words to thank you,” he says.

“Caritas is nothing less than a guardian angel for people in distress like us. May God repay this organisation and all your staff.”

Thank you for all your support in 2019. Please pray for our sisters and brothers in Mahama camp this Christmas.

Jesus, child of Mary,
Look with compassion
on refugees this Christmas,
driven out by war and hunger.

When you shared our humanity,
you travelled as a stranger.
You know how it feels.

You were caught up in the night,
held close by your mother,
as she and Joseph fled abroad
to escape the hand of violence.

On our people who live in deep shadow,
shine now your astounding light.
Our prayer is for justice,
And peace till the moon fails.

The post Caritas Shares a Christmas Message of Hope from Rwanda appeared first on ZENIT – English.