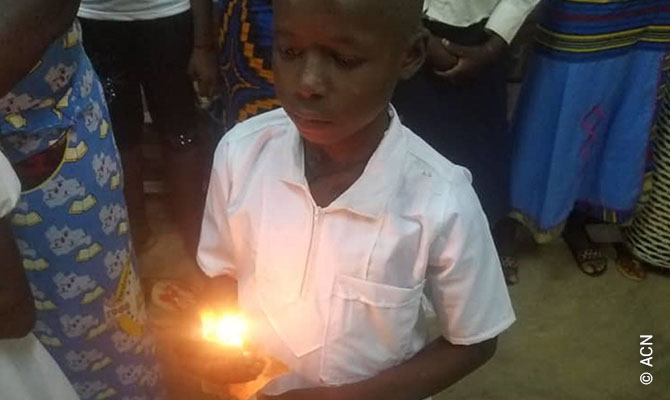 Their faces radiant with joy, children dressed in white dance and sing, clap their hands and pray to God. In Kaya, a provincial capital in Burkina Faso, nothing can overshadow the joy of celebrating First Holy Communion. For a brief moment, the children can forget the horrors they have experienced and the difficulties they face day after day. “The children are originally from Dablo. They came here fleeing from terrorism. But it was COVID-19 that forced us to postpone all of the celebrations that had been planned for the reception of the Sacrament of the First Eucharist,” the priest, Father Gabriel Bamogo, explained to the pontifical foundation ACN International, which provides aid to Christians in Burkina Faso. “Now everyone is giving thanks to the Lord for the joy and the mercy that He gave to them through the Sacrament.”

First terrorism, then COVID-19: Burkina Faso, a country located in the western part of Africa, has taken a battering. Once an oasis of stability and internal peace, since 2015 the country has been drifting ever further into chaos. Jihadists and criminal gangs are inflicting violence upon large parts of the predominantly Muslim country. The motives behind this are manifold: in the multi-ethnic state, rancor arising from the neglect of entire regions by the government has come together with ethnic rivalries and Islamic fanaticism. Jihadists would like to establish a new caliphate. Criminals are taking advantage of the chaos to serve their own purposes. The drug and arms trade is flourishing. In spite of support from France, the former colonial power, the government has failed to gain control of the situation. Almost one million people have become refugees in their own country – bleak prospects for the people living in one of the poorest countries in the world. Christians, who make up about thirty percent of the population, are also targeted by terrorism. Tens of thousands have fled from the regions that are under attack by terrorists. Many have sought refuge in the diocese of Kaya.

One example is young Elizabeth Bamogo. She was born in 2007 and came to Kaya in May 2019. She and her parents fled to safety following a terrorist attack on Christians in the village of Dablo. In May last year, jihadists on motorcycles with machine guns attacked the Catholic church during Sunday mass. Father Simeon, the village priest, was killed, along with five men in the congregation. Before fleeing and setting fire to the church, the murderers threatened the people, “Convert to Islam. If you don’t, you will face the death penalty when we return.”

The girl looks back on these events on the day of her First Holy Communion. “We could no longer stay in our home. It was intolerable. We felt threatened there every day,” she said. “Those who are searching for us have no mercy. They may not kill children, but they will kill our parents. We would have become orphans.” After the horrors she experienced in her village, Elizabeth is even more grateful that she was able to receive the First Holy Communion. “Today is a special day for me. I thank God for this. Because the situation is so difficult, I no longer believed that I would be able to receive the Sacrament.” During the catechesis to prepare for First Holy Communion, she learned that Jesus comes to her in the Eucharist. “I believe in this.”

Etienne Sawadogo is also grateful for the day of his First Holy Communion. Born in 2006, the boy grew up in a small village near Dablo, where the attack on the church took place. Shortly afterward, he also fled with his parents to Kaya. “I had to flee so that I would survive and be able to go to school. We saw how mercilessly they killed. That could have happened to us as well. That is why we fled.” Etienne should have received the Sacrament of the First Eucharist last year in Dablo. However, the precarious security situation made this impossible – and the boy is all the happier now. “I have received the Body and Blood of Christ. This has strengthened my faith.”

The two children who have just received the Sacrament of the First Eucharist will often have need of both faith and optimism. The chaos in their country is not expected to end soon and no one knows when they will be able to return to their villages. On the contrary. The French Ministry of Foreign Affairs recently assessed the situation in the country as more critical and declared most of the country a high-risk zone. French citizens are advised to avoid traveling to these regions. These include both Elizabeth’s and Etienne’s villages as well as Kaya where they have taken refuge. However, at least on the day of her First Holy Communion, Elizabeth still has hope. “In the difficult situation my parents and I are currently facing, I count on Jesus. I have faith in Him.” Etienne feels the same way. “In spite of everything, we are happy because we hope in Him to whom we pray each day.”

In 2019 and 2020, ACN approved almost 100 projects in Burkina Faso. In the diocese of Kaya, the Catholic charity supports priests through Mass stipends and provides funding for the training of seminarians.