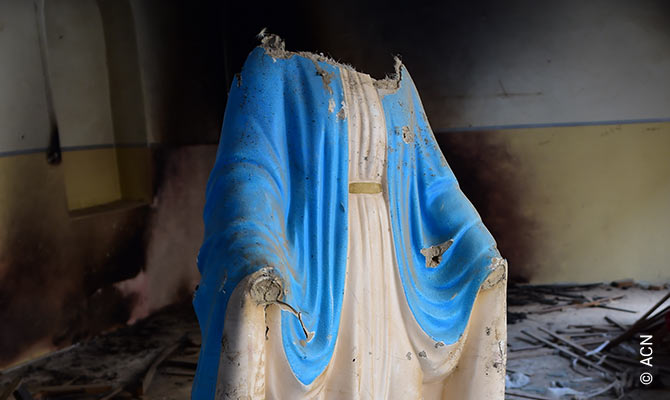 Batnaya is a town in the north of Iraq, some 24 km from Mosul. Before ISIS arrived there were 950 families living here, all of them Chaldean Catholics. It was used by the terrorist group as its frontline while it shelled Kurdish troops. So, without doubt, it was one of the worst-hit areas, first by the invasion of the Islamist terrorists and then by a coalition airstrike. According to a study released by the foundation Aid to the Church in Need (ACN), after the liberation of the zone, only 10 out of the 977 houses were left undamaged, while two-thirds were completely destroyed or burned out. For this reason, although the displaced residents of Batnaya gathered there at Easter time in 2017 to celebrate their first Mass after more than two years of terrorist occupation, any thought of return seemed impossible. For more than two years Batnaya had been a ghost town.

A family of pioneers supported by their Parish Priest

At least that was the situation until last summer. The first family arrived there on 22 June 2019. Their house was in a bad state but Faris Hanna Naamo still wanted to return. “It was my house after all,” he tells Aid to the Church in Need. He was stubborn enough to persuade his wife Hana, and together with their three children, they returned to the town. “There was no electricity or running water… and no neighbors. Even something as simple as going out to do the shopping was risky, as we had to travel 5km and go through the army checkpoints in order to get to the next town, Teleskof”, Faris explains.

“Stubborn or determined?” wonders Father Aram Rameel Hanna of the parish of Batnaya, who was of the greatest help to the Faris family right from the start. The couple are very indebted to him because, as they assure ACN, there wasn’t a single day during that terrible time when Father Aram didn’t visit the family. “I don’t know what we would have done without him. We went through many difficult moments in which it was very hard to believe that everything was going to get better. I remember that my youngest daughter, Nour, didn’t have any friends to play with, she only had her big sister. She would take her bicycle and cycle through the empty streets for the whole day. It grieved me. When Father Aram came, it was a great blessing for us, he gave us hope. He was a like a breath of fresh air and he strengthened our faith. Thanks to him, we were able to stay strong.”

Father Aram insists that he only came for a cup of tea, taking no credit for himself. However, it is no secret that this priest, who studied at Harvard and who had been running a help center for people suffering from trauma and stress disorder in the neighboring town Algosh, was about to leave with a grant to finish his studies when his bishop asked him to look after Batnaya, and so he stayed.

After the Faris family, there were other families who had the courage to return, among them Ghaliv Nouh Oraha, his wife Sandra and their five children. They returned to Batnaya on September 25, 2019. There were already two families there by then. Shopkeeper Diver Salem decided it was time to open a shop, and that was how the “Market for Returnees” was born. Diver’s courage impressed Father Andrzej Halemba, who heads ACN’s Middle East projects section, on his latest visit to Iraq. “Diver told me he had had a feeling that the time had come, but I don’t know how he could even imagine that other families would see it that way, too. He would have never been able to survive with only two families as customers. Of course, there are families who feel safer having a shop nearby, but now 75 families have returned already! I believe it has clearly been a work of Providence; if not, it would not have worked so well.”

“I even met a man who had returned from Germany and who was waiting for his wife to come and join him”, Father Andrzej Halemba continues. He is referring to Basher Kiryakos Hanna, who returned as soon as he was able since his wife did not feel at home in Europe. “But it is not easy”, Father Halemba warns. “We cannot forget the atrocities that were committed in Iraq; the danger was real, and the people were absolutely terrified. But now Batnaya is timidly rising from the ashes. There are over 300 Christians in the town now, and I’m sure that more will come if we help them from our Foundation.”

It is help that is absolutely vital since there are some projects that are of fundamental importance for the life of the community. The Christians of Batnaya need a church, a community center and a nursery school for their children. There is a school bus that every morning picks up around 20 children, eager to meet with their friends and learn new things. But for the younger children, there is still no kindergarten or nursery school. The Dominican Sisters of St. Catherine of Siena, present in Batnaya for over a hundred years, had to flee with their people and accompanied them during the exile in Ankawa and Duhok. Now they want to return to continue serving them. And so they have embarked on a double project, involving the rebuilding both of the kindergarten and at the same time their own convent, both bombed and fully destroyed. With the support of ACN, they are hoping to be able to obtain the necessary cash to begin work on both projects. “In sha Allah – God willing”, say the sisters, who, despite having suffered greatly during the past few years, have lost none of their courage or their hope in God.

Also, the church of Mar Kriakhos and the chapel dedicated to Our Lady of the Immaculate (Al-Tahira Chapel), desecrated, burned and sacked by the terrorists of the Islamic State, await aid to be rebuilt. The images were beheaded, the windows were broken, the terrorists used the spaces as a shooting area and painted graffiti both in Arabic and in German: ” Slaves of the cross – we will kill you all. This is Islamic territory … you do not belong here». Fari and Hana, Ghaily and Sandra, Basher Kiryakos or Diver Salem have had the courage and audacity to return and prove that their faith and love for the ancestors’ land is stronger than the fear of those threats. ACN is committed to helping them with their purpose.